I took the new Ted Raicer wargame The Dark Sands, War in North Africa, 1940-42 (GMT Games, 2018) out for try this weekend. After punching (and organizing) all the counters I tried out scenario 1.1 COMPASS. As the Victory Conditions state, there is no losing this scenario for the British. Instead, the two-turn scenario serves as a great “training wheels” scenario to learn the Dark Chit-Pull System.

As I was preparing to play, I watched the entire Twitter video series from @PastorJoelT. I highly recommend it!

Unlike @PastorJoelT, my map did not have any issues. As I played through my first time I did have some thoughts….

The Rule Book for The Dark Sands is 20 pages. At first this looked a bit intimidating, but while reading it I realized that the how to play is covered on about eight pages with the balance mostly definitions and descriptions. Unfortunately, the how to starts in section 16.0 Sequence of Play on page 12. For some reason I found this arrangement hard to process. If I had my druthers, I think I would swap 5.0 How To Win on page 7 with 16.0 Sequence of Play. As I was reading all the rules on 6.0 Terrain Effects or 7.0 Unit Stacking and so forth I found myself needing to understand where in the game the rule fits.

For example, rule 12.7 Panzer Doctrine includes 12.7.1 Momentum which allows Panzer Divisions to perform a second Action. But the rule for an Action is covered in 18.0 The Action Phase…six pages later in the rulebook. Before I could play my first game, I ended up having to read the rulebook three times; once from start to finish just to find the rules, a second time to focus on the how to play (16.0 – 23.0) and a third time to learn all the other definitions (6.0 – 15.0). Thankfully, the core mechanics of the Dark Chit-Pull System are not very complex and I was able to get to play quickly…after the third rules reading.

As much as I love the Action Chits for introducing a fog-of-war element and making The Dark Sands very solo-friendly, I found the ACTION CHIT DESCRIPTIONS play aid a bit hard to use. Instead of a single page with a wall of text, I would have liked to see two cards (half-sheet?), one British and one German, that included all the “generic” actions as well as the faction-specific ones. Having a separate play aid would help in between turns to be able to look at what what could be coming and during a turn to see what the particular chit really means all without getting in the way of an opponent who is trying to do the same!

As I already stated, the actual how to play rules for The Dark Sands is rather compact. This helps the game play along rather quickly. Each of the scenarios (four in the Playbook) are rated at 2-4 hours while the Campaign Game (all 17 turns from December 1940 thru December 1942) is rated at 18 hours. In my play, the first scenario went by in far less than 2 hours (even while learning). The first scenario played so fast that when I finished I just went ahead and reset for the three-turn scenario 1.2 SUNFLOWER. Which leads me to my last point… 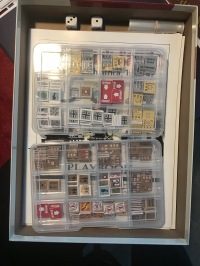 A key factor in being able to enjoy The Dark Sands is organization. As far as the arrival of units is concerned, there is a very nice Reinforcement Track across the top of the maps. Every unit has a spot on this track. This means setup can be easy…if one prepares ahead of time. For myself, I found that I can organize my counters in two small hardware cases from Dollar Tree. Not only do all the counters fit (in some semblance of the order of arrival) but they also lay neatly within the box with room to spare!

Final Thoughts – and a Look Ahead

I enjoyed my play of The Dark Sands so much I went ahead and ordered The Dark Valley, The East Front Campaign, 1941-45 (Deluxe Edition) as well as The Dark Summer, Normandy 1944. I realize that Dark Valley, covering four years, will be a larger game than Dark Sands while Dark Summer may be more focused. My main point is that The Dark Sands has captured my imagination and brought enough enjoyment that I am willing to pledge for the two other games in the Dark Chit-Pull Series.

I don’t think I will be disappointed.