RECENTLY, THE GENTLEMEN AT ARMCHAIRDRAGOONS WERE KIND ENOUGH TO POST A REVIEW I WROTE. My major knock on the game is that, “play is unfortunately marred by a rule book that makes learning the game harder than it should.”

In the case of Blue Water Navy: The War at Sea (Compass Games, 2019) a better rule book has:

A rule book needs to be governed by a style guide. I won’t tell you what to use, but when you don’t it’s really noticeable! There is no one-size-fits-all solution. There is not a magical wargame rule book template that an aspiring (or well-established) designer can just download from the internet. What is needed is not a format as much as an attitude. 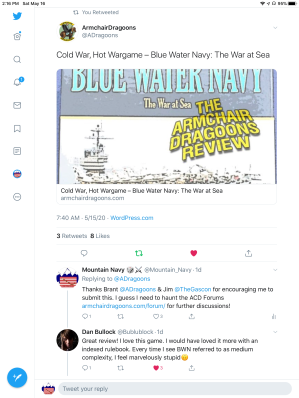 In a Twitter reply to my Armchair Dragoons article, Dan Bullock (@Bublublock) said, “Every time I see BWN referred to as medium complexity, I feel marvelously stupid.” Indeed, an underlying theme of my post this week, Hard Core #Wargame? Assault – Tactical Combat in Europe: 1985 (GDW, 1983) is complexity as how each individual sees it. In the case of Blue Water Navy a great deal of the complexity is learning complexity from the less-than-stellar written rules. In Assault for the mystery reviewer I talk about it appears mechanical complexity, i.e. using the game components, was far too complex for them. I feel a longer think-piece coming…but it’s not quite fully formed yet.

Picked up on a small thread on BoardGameGeek about BGG renaming wargame titles. You know, like taking the last two games I discussed on my blog, Assault and Dawn of Empire, and making sure the database names are Assault – Tactical Combat in Europe: 1985 and Dawn of Empire: The Spanish-American Naval War in the Atlantic, 1898. Personally it doesn’t bother me as I clearly see a subtitle as part of the title. Apparently I am too simple, because the BGG policy appears to not only incorporate subtitles, but also any box cover description. Taken to the extreme, games like Terraforming Mars from Stronghold Games becomes either:

Yes, leave it to the hobby boardgame community on BGG to make this an issue. Well, if this is the new policy I can’t wait to see the update for Supply Lines of the American Revolution – The Northern Theater, 1775-1777: being a Game of War, or Logistics & Deception; & a suitable & commendable past-time for gentlemen & ladies both; invented by Mr. Tom Russell, a Patriot born in these United States with cartographical embellishment by Ania B. Ziolkowska. I mean, it’s about time Tom and Mary Russell (@tomandmary) of Hollandspiele got recognition for this fine work!