Grant over on The Players Aid blog laid out his 15 Influential Wargames from the Decade 2010-2019. In the posting Grant asked for others to give their list. Although I have been a wargaming grognard since 1979 in the early 2010’s I was focused more on role playing games. That is, until 2016 when I turned back into hobby gaming and wargaming in particular. So yes, my list is a bit unbalanced and definitely favors the later-half of the decade. Here is my list of ‘influential’ games arranged by date of publication along with an explanation of why the title influences me.

For the longest time I considered myself near-exclusively a naval wargamer. I’m not sure why, but in early 2017 I picked up a copy of Conflict of Heroes: Awakening the Bear (Second Edition). I think at the time I was looking for a good tactical WWII game to play with the RockyMountainNavy Boys. I am glad I did, as along the way I also discovered the excellent Firefight Generator and Solo Expansion, and eventually other titles to include the latest Conflict of Heroes: Storms of Steel, Kursk 1943 (2019) where I have a small credit in the rulebook. This game, like no other, awakened me to the ‘new look’ of wargames and the positive influence the Eurogame segment of the hobby market can have on wargaming.

In 2017 I attended the CONNECTIONS Wargaming Conference. There I met a fine gentleman, Uwe Eickert, of Academy Games. As we talked about his Conflict of Heroes series (I even helped him demo a few games) I mentioned my boys and our search for good family wargames. Uwe strongly recommended his Birth of America series, especially 1775 Rebellion. So I ordered it and the RMN Boys and myself sat down to play this lite-wargame – and we haven’t looked back since. We now own all the Birth of America and Birth of Europe series. 878 Vikings is one game the oldest (least gamer) RMN Boy will play with us. Most influential because it shows that there are much, much better ‘family-wargames’ than Risk. As an added bonus, I am working with one of my youngest boy’s high school teachers to bring this game into his classroom.

After attending CONNECTIONS 2017, I tried to become a bit of a wargaming advocate at my job. So I looked at more ‘serious’ wargames. One of the hot topics of the day is the Baltics and Russia. I looked for wargames that could build understanding of the issues, especially if it comes to open conflict. Sitting on my shelf from long ago was were several GMT Games ‘Crisis’ series titles, Crisis: Korea 1995 and Crisis: Sinai 1973. I had heard about updated versions but had been reluctant to seek them out. Now I went searching and found a wargame that is a master-level study into the military situation. This game influenced me because it shows that a commercial wargame can be used for ‘serious’ purposes.

Before 2017, an aerial combat wargame to me was a super-tactical study of aircraft, weapons, and maneuver. The most extreme version was Birds of Prey (Ad Astra, 2008) with it’s infamous ‘nomograph.’ I had all-but-given-up on air combat games until I discovered the Wing Leader series. But was this really air combat? I mean, the map is like a side-scroll video game? The first time I played the level of abstraction in combat resolution was jarring. But as I kept playing I discovered that Wing Leader, perhaps better than any other air combat game, really captures ‘why’ the war in the air takes place. Units have missions they must accomplish, and those missions are actually the focus of this game, not the minutia of flap settings or Pk of a missile hit. Influential because it shows me that model abstraction is not necessarily a bad thing, especially when done right like it is here.

As I returned to wargaming in 2016-2017, I kept hearing about this thing called the COIN-series. I looked at a few titles but was not quite ready to go ‘full-waro’* so I backed off. At the same time, having moved to the East Coast, I was much more interested in the American Revolution. By late 2017 I was becoming more ‘waro-friendly’ so when I had a chance to purchase Liberty or Death: The American Insurrection I took it. I’m really glad I did. LoD is influential because it taught me that a wargame can be political and a real tool of learning. I understand that LoD is the designer’s ‘view’ of the American Revolution but I enjoy experimenting within that vision and seeing what I can learn.

Prior to my wargaming renaissance, I acquired Memoir ’44 for the RockyMountainNavy Boys. We also had Battlelore and in an effort to entice the oldest RMN Boy (an ancient history lover) into gaming had given him Commands & Colors: Ancients. That is to say, Commands & Colors was not new to the RMN House. As part of my American Revolution kick I picked up Commands & Colors Tricorne thinking I would try to get the RMN Boys to play this version. Instead, I fell in love with the game. Influential because it showed me that with just a few simple rules tweaks a highly thematic, yet ‘authentic’, gaming experience is possible even with a simple game engine.

Remember I said I was a naval wargamer? Notice the lack of naval wargames on this list? That’s because I found few that could match my experiences with the Victory Games Fleet-series of the 1980’s. That is, until I played South China Sea. All the more interesting because it started out as a ‘professional’ wargame designed for a DoD customer. Not a perfect game, but influential because it shows me it is possible to look at modern warfare at sea by focusing less on the hardware and more on the processes of naval warfare as well as being an example of a professional-gone-commercial wargame.

At CONNECTIONS 2017, Uwe Eickert sat on a panel and recommended to all the DoD persons in the room that if they want logistics in a wargame they need to look at Hollandspiele’s Supply Lines of the American Revolution: The Northern Theater, 1775-1777 game. I found the game online and ordered it (from a very strange little company using a Print-on-Demand publishing model..WTF?). When it arrived and I put it on the table and played I was blown away. First, it has ‘cubes,’ not armies or dudes. Second, it really teaches why certain locations were crucial for the American Revolution. Third, it’s challenging and just darn fun to play. Influential because this was the first game I recognized as a ‘waro’, and the first of many quirky Hollandspiele titles that I enjoy.

Solo wargames are very procedural, right? So procedural they are nothing more than a puzzle to be solved, right. Not Pavlov’s House. I was blown away by the strategy and story that comes thru every play of this game. This is a solo game that makes you want to play because it’s the strategy that counts, not the procedure. Influential because I showed me what a solo game can be as well as how a game that screams ‘Euro’ is actually a wargame. 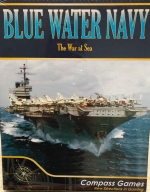 As the decade came to a close, I had all-but-given up on naval wargaming. When I first saw Blue Water Navy I had thoughts of one of my favorite strategic WW3 at Sea games, Seapower & the State (Simulations Canada, 1982). The play length of BWN, 1-16 hours, kinda put me off at first as I prefer shorter games. As I read more I became more intrigued so I finally purchased it. Now it sits on this list as an influential game because it shows me how abstraction and non-traditional wargame mechanics (cards?) can be used to craft a game that literally plays out like a Tom Clancy or Larry Bond novel. 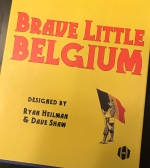 I have been a grognard since 1979. Why do I need a simple wargame that doesn’t even use hexes? I mean, this game uses a chit-pull mechanic (good for solo play) and point-to-point movement. In a game this simple there can’t be much depth, right? Hey, where is the CRT? Speak about a small war…. Influential because this game shows that simplicity can be a very high art. Brave Little Belgium is my go-to quick intro wargame for hobby boardgamers.

This one is very personal. My Middle Boy is on the autism spectrum and when his younger brother started an evening program once a week the Middle one was a bit lost without his companion. So I looked around for a wargame we could play in a sort of ‘filler-wargame’ mode – short and simple on a weeknight. And play we did; ten times in 2019. He beat me seven times. Influential because this game – sometimes derided as a simplified ‘Command & Colors wannabe’ – connected me closer to my Middle Boy than any game before.

The folks from the US Army Command & General Staff College at CONNECTIONS 2019 had a copy of Less Than 60 Miles on their table and were singing praises of the game. I was fortunate enough to be able to trade for the game later on BGG. What I discovered was a wargame built around John Boyd’s OODA Loop. At the same time I was reading A New Conception of War: John Boyd, the U.S. Marines, and Maneuver Warfare. Putting the two of them together was like lightening in a bottle. This is a heavy, serious game that is also playable and enjoyable. Influential for no other reason than it shows me that OODA applies far beyond the cockpit; indeed, I need to look at OODA for many more games. 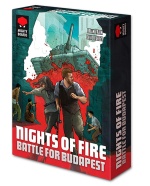 Brian Train is a designer that often looks at lesser or different wars and always brings forth an interesting perspective in his games. He calls this game, ‘a militarized Eurogame.’ He’s right; this title is the full embodiment of a waro game. I often argue with myself if this is even a wargame; after all, you can play solo, head-to-head, teams, or cooperative. Hobby boardgame or wargame? Influential for that very reason as it represents to me the full arrival of the ‘waro’ to the hobby gaming market.

Like Nights of Fire, this can’t really be a wargame. It has no board, no dice, and no CRT. Instead it has ‘tableaus’ for tanks and (lots of) cards! You can also play up to eight players. There is no player elimination – tanks respawn! What on earth is this? Influential because it challenges all my traditional views of a wargame only to deliver some of the best wargaming experiences I have ever had at the gaming table.

There are many more games from 2010-2019 that influenced me. Games with the chit-pull mechanic are now my favorite to solo with, but I didn’t put one on the list. Maybe I should of….

Hmm…I see it’s also hard to pin down one particular publisher that particularly influences me. In this list of 15 games we have:

Not a bad spread!

*’Waro’ – A combination of ‘wargame’ and ‘Eurogame. To me it is a wargame that incorporates Eurogame like look/components or mechanics vice a traditional hex & counter wargame.