I STILL remember the day back in late 1979 I discovered three Little Black Books (LBB). Since then, I have been a (mostly) loyal Traveller RPG player. The game has gone through many versions from the first (now Classic) Traveller with the latest from original creator Marc Miller called Traveller 5 (T5).

T5 is an interesting beast. Funded through Kickstarter in 2012, the game eventually delivered a beta disk, softcopy, hardcopy, and a revised version 5.09 via softcopy again in 2015. Many people were disappointed in T5.09. Personally, I found it unplayable as a game but a great toolkit for setting creation and worldbuilding. I was not as negative as some and used it to support Mongoose Traveller First Edition and now Cepheus Engine after the Great Mongoose Traveller Debacle.

If I am reading the announcement correctly, as an original T5 Kickstarter backer I am going to get an electronic version of T5.10 automatically. If I want to get the physical books for T5.10 I need to back the Kickstarter. The three Big Black Books are going set one back $100. That’s a bit of change…. 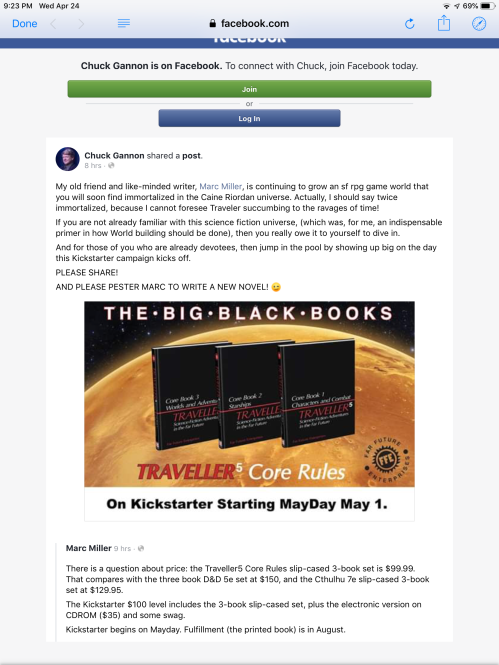 I’m torn. Marc says the plan is to relase the electronic version in July-August just before physical copies are sent. This means I am really taking that Kickstarter risk – buying the new game relatively sight-unseen.

Then there is the question about the original Kickstarter and whether it’s really finished:

By popular demand, we have committed to producing the Traveller5 Player’s Book: a handy digest-size rules reference tailored for use by Players but without the (primarily) Referee’s rules. We expect to produce a printed version in Spring 2013, but every Backer who orders a Book will receive a link to an Ebook version when it is complete. (T5 Kickstarter Campaign)

It’s 2019 and there has been no Player’s Book. Nor is it mentioned in the new Kickstarter. Spider-sense is tingling….

The Traveller fan boy in me wants to jump in; the more logical side (heavily influenced by Mrs. RMN who has, politely and without nagging, asked me to control my hobby gaming spending) says to be careful – the trons version should be enough. If T5.10 is not easily playable like T5.09 then $100 is a really expensive toolkit. But 800 pages of trons is really tough to read…and I really like imagining the slipcase on my bookshelf and caressing those BBBs in my hands.

To be honest, in the past year I have barely touched any RPGs. I went through a very strong hobby boardgame and wargame phase in 2018 and in 2019 I have dialed it back to mostly wargames with a smattering of family boardgames. I am dedicated to playing more games already in my collection and resisting the Cult of the New (CotN) or Fear of Missing Out (FoMO).

Yeah…right. Who am I kidding?