I have not played a wargame or boardgame in over a week now. Not because I have stopped playing; instead I have been off playing with the RockyMountainNavy Family at DisneyWorld. Now fully recharged I am ready to get back to the gaming table! 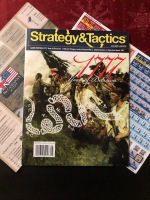 Before Spring Break, I had several opportunities to play @HBuchanan2‘s Campaigns of 1777. These days I am becoming a sucker for the chit-pull mechanic in games as they make the game very solo-friendly even without a dedicated solitaire version. I am also a sucker for wargames the American Revolution era. After driving from Virginia to Florida and passing by several Revolutionary War sites, I really hope he goes ahead with southern campaign version too! 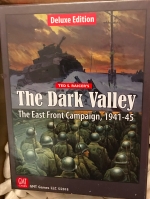 Around the same time Campaigns of 1777 arrived I also too delivery of my GMT Games P500 order of @tdraicer‘s The Dark Valley Deluxe Edition. This is in many ways a modern monster game covering the complete Eastern Front campaign in World War II. I bought into the game based (once again) on the chit-pull mechanism that I enjoyed in the previous Ted Racier/GMT Games title, The Dark Sands. I have to admit that I want to get this one to the table soon; as I was inspecting the game and had the board laid out Youngest RMN and I started looking at the geography and talking in general terms about Operation Barbarossa and Eastern Front. Historically I have avoided anything above tactical-level games about the Eastern Front; looking to change that with The Dark Valley! 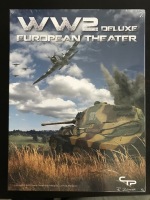 Finally, on the day before we travelled, a relatively new publisher, Canvas Temple Publishing, delivered their Kickstarter for WW2 Deluxe. This is supposed to be a game where one can play the European Theater (or Western Front) in World War II in an evening. First pass through the rulebook and components looks promising!

We actually took a few boardgames with us on vacation but were lucky and had not bad weather days so the games remained unplayed. The RMN Boys did play a few games of Ticket to Ride or Battlelore or 1775: Rebellion on the iPad but I didn’t get to play (something about driving and playing at the same time just doesn’t work!). We had considered taking Villainous with us but thought that would be too much Disney. So, with vacation behind me and now emotionally recharged, it’s time to get back to wargaming and boardgaming.