Rhino Hero (HABA, 2011) is not a wargame. It is a dexterity card game that can be played in less than 15 minutes. It features a cute Rhino with a cape. Why on earth would such a kids game be popular in the Grognard RockyMountainNavy house?

Because it’s a GREAT game. And after nearly 40 plays it continues to amaze.

Case in point. This weekend the RockyMountainNavy Boys wanted to play a game after Sunday dinner. Being a school night we couldn’t get into something too deep as they still needed to do their evening chores and otherwise get ready. So we pulled Rhino Hero out.

The last time we played we set a new family record of 13 levels. This time we started out reaching 12 levels before collapse. We then reset for another round. 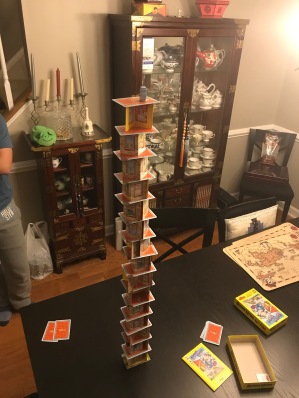 As we started the next building, it quickly became obvious that many 2-wall cards were coming out with very few Rhino cards (which forces placement of the Rhino pawn). We kept building and building until we got to the 15th level…and ran out of walls.

Puzzled, Youngest RMN asked, “What do we do now?” I consulted the rulebook and discovered – we won! None of us knew this rule because we had NEVER reached this situation before!

Feeling giddy with excitement, Middle RMN Boy pulled out a Rhino card he was still holding. Placing it gently upon the top of the tower, he then just as carefully placed Rhino Hero atop the tower. We all then basked in the glory of the win.

So…now that we know we can “beat” Rhino Hero the next challenge is to do the same in Rhino Hero – Super Battle. Wish us luck!