Designer Matt Leacock’s Pandemic (Z-Man Games, 2008) is a popular game in the RockyMountainNavy house. This is a bit surprising because we really are more wargamers than Eurogamers. Over the years, we have played a few epic Pandemic games and we love playing the title because every game is a narrative adventure. The RockyMountainNavy Boys also like Ancient Rome; indeed Enemies of Rome (Worthington Publishing, 2017) is the most-played wargame in the house this year. So when I saw the match of the Pandemic-mechanics with the Rome theme, Pandemic: Fall of Rome (Z-Man Games, 2018) was an autobuy. 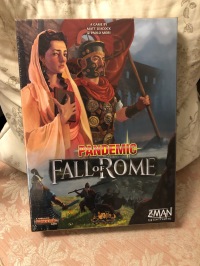 Having arrived this week, Pandemic: Fall of Rome had to land on the table for an early Game Night. Early because the oldest RMN Boy wanted to play and he usually works Saturday nights. Our first-ever game of Pandemic: Fall of Rome was a four-player adventure with Middle RMN as Consul, Youngest RMN as Mercator, Oldest RMN as Praefectus Fabrum, and myself as Magister Militum.

The base game comes with seven different Roles. There is not easy direct translation from the classic Pandemic Roles to Fall of Rome so it takes a bit more to figure out (and remember) what all special abilities each Role has. A real starting challenge that will surely get easier as more plays build familiarity.

There are now eight different Actions to chose from. March, Sail, Plot, and Forge Alliance are easily translated from Pandemic but Fortify, Recruit Army, Battle(!) and Enlist Barbarians are much different. When taken in combination with the two or three special ability Actions each Role has this means new players must figure out how to select from a menu of 10-11 Actions each turn. Add into that each Role’s special effect in Battle. I know that at least once I could of used my special ability if I had remembered to look at it.

Another layer of complexity are the Event Cards. When played, Event Cards do not count against the player’s 4 Action limit each turn (they do count against the Hand Limit though). Each Event Card has a standard option and a corrupt option which, when used, is powerful but progresses the Decline Marker another step towards defeat. I personally liked this choice; do the standard for OK effect or risk defeat for a more powerful effect.

The rules for Revolts and Invade Cities in Fall of Rome are not difficult but the spread of the barbarians is much different than the spread of infection in classic Pandemic. Different enough that this section requires a much closer reading than I gave it.

Being a wargaming family we really were looking forward to the Battle Action in Fall of Rome. The Action turned out to not quite be what we expected. When battling, you have to be ready to lose Legions. There are several ways to build Legions (Recruit Army or Enlist Barbarians) and using these Actions will be needed to raise forces to stem the advancing hordes.

Thematically, all the game elements come together and do a good job of creating the feel of a declining Rome. Although I am a historian by education, I was pleased to see the designers making a point that Fall of Rome is not a historical game.  Amusingly, they make that point in the Historical Notes on p. 11:

Pandemic: Fall of Rome is inspired by the historical events surrounding the fall of the western Roman Empire….

Although a strong attempt has been made to pair game mechanics with some level of historical backing, the game is not attempting to be considered as a historical simulation….When a design choice was required between simulation and gameplay, gameplay received preference.

We lost our first game of Pandemic: Fall of Rome. Like really lost. Rome was sacked when we only had two of the five needed alliances. We will play again, but next time we will be much smarter because we now clearly see that although Fall of Rome is a Pandemic–style game, it is not a Pandemic clone. Fall of Rome is a much different strategic challenge than Pandemic. Thematically, Fall of Rome also delivers on the title; there are times when one feels helpless against the never-ending invading hordes. Few boardgames really deliver on theme (Battlestar Galactica: The Board Game (Fantasy Flight Games, 2008) is the best exception) and Pandemic: Fall of Rome is one of them. For that reason alone the game will land on the table again – only next time we will all be smarter and more prepared to face the tough challenge.