Two RPG items I got over the holidays were Ships of the Clement Sector 16: Rucker Class Merchant (Gypsy Knights Games) and The Space Patrol (Stellagama Publishing). Long-time Traveller RPG fan Alegis Downport already posted his views of each so I direct your attention to his excellent comments (Rucker / Space Patrol) and will just add a few more thoughts of my own. 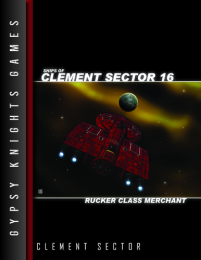 Make sure you read both parts of Alegis Downport’s comments on the Rucker since he had a very intimate hand in the creation of the ship. There is nothing more I can add except to heartily endorse all the kudos he gives to Gypsy Knights Games for bringing Ships of the Clement Sector 16: Rucker Class Merchant to market. SotCS 16 continues a great line of useful products from Gypsy Knights Games that are at home in any Traveller RPG setting. Thanks to Alegis Downport, users of the ship now have even more thought-seeds for adventure. 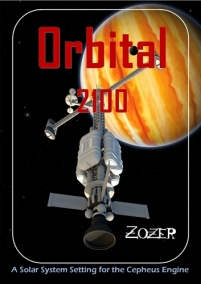 Orbital: 2100 (Zozer Games) is a much better example of how to take the original Traveller 2d6 sci-fi system (as detailed in Cepheus Engine) and use it to make an exciting Alternate Traveller Universe. I also feel that The Space Patrol suffers from some poor formatting decisions (like more-that-a-few tables that cross pages) that make it feel a bit too DTP-like in an era where small publishers (like Gypsy Knights Games) push out very high quality products. But don’t get me wrong – The Space Patrol is a great addition to any Traveller/2d6 Sci-Fi/Cepheus Engine setting and should be in everyones collection. I just wouldn’t have given it the coveted ATU Setting of the Year.