At the end of the 2000-aughts my roleplaying collection again took a different turn. For a few years, I turned away from new game systems and instead invested in campaign settings. At the time, the seemingly most popular settings were published courtesy of major publishers, or what I term “manufacturer settings.” I realize the term is not totally fair; in more than a few cases the setting was a labor of love from a small-time or alternative author that teamed with the larger publishing house because they had the experience and marketing prowess to bring the product to market.

Universe of Babylon 5 used Mongoose Publishing’s Traveller (1E) game engine. This campaign setting was translated from an earlier D20 series. UoB5 suffers from poor editing and sloppy game system translation as well as poor production quality. Given how rich a setting the B5 Universe is, to have the game version be so poorly done is a travesty. A major disappointment.

Reign of Discordia (Mongoose/Gun Metal Games) was another campaign setting using the Traveller 1E-engine. Another system translation (originally True20) it suffered from many of the the same issues as U0B5. Another disappointment. 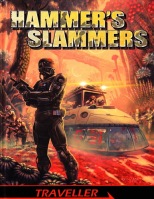 When I saw Hammer’s Slammers (Mongoose) I just had to get it. Here was going to be the RPG version of my favorite military science-fiction series! Even better, it used the Traveller 1E-game engine that I was so familiar with!

The fact that it was Mongoose should of been a warning. That and the cover art – that soldier is nothing like I imagined Hammer’s Slammers to be. Opening up the book, the maps were so amateur and very un-military-like. The rules were an expansion of the basic game engine, and links to future products were promised (and never delivered).

In my disgust with Mongoose – they had obviously tried to cash in on the Hammer’s Slammers name and ended up doing a great disservice to the IP – I turned to another recognized gaming name.

By the end of 2010 my flirtation with campaign settings died out. Looking back, each of these settings I tried was backed by a major publishing house and closely tied to their game engine. In the case of Mongoose the poor production values reflected to me a cash-grab attitude the turned me off then like it does today. The second part of the problem was that there was little “new” in these settings; in each case the setting was a translation of an older IP or license into a newer game engine. Red Sands was the best done of my lot, but I was looking for more.

In retrospect, this era – 2009 thru 2010 – was a major disappointment. Interestingly to me, I purchased each of these settings in a dead-tree form. This was among the last times I did that. The rise of online publishing and the availability of content through sites like RPGNow or DriveThruRPG (and more recently the Open Gaming Store) were starting to dramatically change not only how, but what content was being delivered to RPG customers like myself.

All images courtesy RPGGeek except where noted.