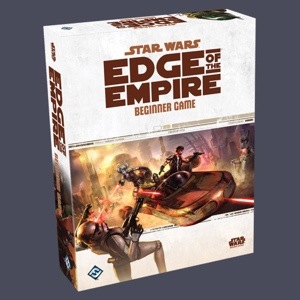 Sat down today for a first-ever run through of Edge of the Empire Beginners Game with Little I and T. Both took two characters to play. As this was the first time for them playing EotE and for me being a GM for this system it was very much “by the book” for the adventure.

The session took about 2 hours to play. As this was the boys first time I found that as the GM I was describing Advantage and Triumph more than they were. Understandable since they were very unfamiliar with the game mechanics and not used to the narrative approach to gaming. As the session progressed they got better and by the end they were offering up suggestions. The most memorable moment was when Lohrickk the Wookie (played by Little I) used his Vibro-Axe to smash the Stormtrooper Sergeant and scored a Triumph which led to a Thor-like shockwave that knocked the rest of the Stormtrooper squad down.

The Good
– Narrative Play: As the boys came up with ideas I rewarded them with bonus or setback die. This encouraged them to think and scheme creatively.

The Bad
– Destiny Points: Like Bennies in Savage Worlds or Plot Points in Cortex I feel these should be used liberally; as it was I think I was being a bit too generous with bonus die and not giving the players a chance to chose to use Destiny.

Little I insisted that the boys create their own characters and has already dug through the box of Star Wars Miniatures and chosen his figure. He is anxiously awaiting to start his own adventure. Both the boys pulled out Episode IV tonight to get in the right frame of mind for their campaign.