#Boardgamer or #Wargamer? Let’s throw in a little Kickstarter rant too

I was listening to designer Tom Russell in his interview on 5 Games for Doomsday. Tom talks about how he didn’t play games with his family growing up. This got me thinking about how I got into hobby gaming and where I am today.

I got seriously into gaming in 1979 when I was in middle school and discovered Jim Day’s Panzer from Yaquinto Publishing. In the years prior to that my parents had a few games around but we barely played them. The titles I recall are Monopoly, Clue, Othello, and Waterworks in addition to Chinese Checkers. The only games I really remember playing are Chinese Checkers and Othello.

From 1979 until the early 2000’s I was a pure wargamer. I also dabbled in roleplaying games but wargames were my real hobby. It was not until the RockyMountainNavy Kids grew up a bit that I tried some family games like Gulo Gulo (still a favorite).

In 2016 my hobby took on a new direction with the real discovery of hobby boardgames. At the recommendation of Uwe Eickert of Academy Games I picked up Scythe – and discovered a whole new world of gaming. In 2017 and 2018 I went overboard with rediscovered wargaming and boardgaming. Too far overboard – at the start of 2019 Mrs. RockyMountainNavy asked that I look hard at my gaming budget and think about some restraint.

So in 2019 I have tried to restrain myself. In doing so, I have thought about my game buying habits in 2017 and 2018. I continuously told myself that I was not a member of the Cult of the New or susceptible to the Fear of Missing Out.

Wrong. Not only was I a CotN member, but I was fully infected with FoMO.

In 2019 I initiated a series of gaming challenges (CSR, Origins, Golden Geek) that have forced me (willingly) to explore older games in my collection. I have found some bad ones, but many good ones. It has been a great reminder that I have good games in my collection and they deserve some love. 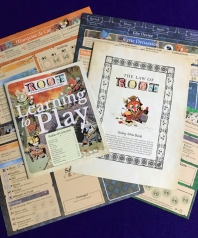 In 2019 I have tried to find my roots. As I look across the boardgaming world I find fewer and fewer titles that appeal to me. If there is one area that I am really interested in, it’s hybrid games like Root (wargame or strategy game?) or several Hollandspiele titles like the Supply Lines of the American Revolution series.

Another part of the hobby I am less-than-satisfied with is Kickstarter. I respect companies that use Kickstarter to bring games to print that would otherwise never see the light of day. But more and more I see companies using Kickstarter as a glorified pre-order system. I understand that many companies like the fact that the risk is moved from them to the consumer. They may like it but I am not as appreciative. What I see in many cases is that I am advancing the company a loan – without interest.

Now, I don’t necessarily define “interest” as money. A Kickstarter campaign that offers exclusives or stretch goals that area only available to backers is one form. But more and more I see companies not offering stretch goals or campaign exclusives – what you get in the campaign is what you can buy at retail.

I also dislike the risk that I am assuming in the enjoyment of the game. Kickstarter demands you pledge to support a game based upon only a few known, and many unknown, factors. Maybe that designer has a history of good games but I am sure there are a few turkeys in there. That company has its own history too. But what about the game? How does the game really play? This forces a dependency on hobby content providers at a time when “critical” reviews are fewer and fewer. Nobody watches a 30 minute video review of a 2 hour movie; why should we be forced to watch a lengthy video for a game? No.

So I have returned to being a wargamer first and a boardgamer second. I have several good titles in my collection. Scythe will remain. Terraforming Mars (minus several expansions) will stay in the rotation. Firefly: The Board Game will get played but Star Wars: Outer Rim is likely a pass. I’m going to finish up my challenges for the year.

And I’m going to enjoy every game played.