A few posts back I took to task The Great War at Sea Volume III: U.S. Navy Plan Orange (Avalanche Press, 1998) as being too much of a tactical battle generator and not enough of a design to explore the strategic nuances behind Plan Orange. After playing that game and its sister Volume IV: The Russo-Japanese War (Avalanche Press, 1999) where I discussed Bruce Geryk’s notions of strategists versus recreationists, I looked around for another game in my collection that could satisfy my needs. I ended up pulling Mark Herman’s Plan Orange: Pacific War, 1932-1935 (C3iOps Magazine, 2016).

I am fortunate that I have already played this game a few times so I am past the point of being forced to concentrate on the how to play and instead can focus on the strategy of play. Although Plan Orange is based on Mark Herman’s previous work Empire of the Sun (GMT Games, 2005), I don’t own that game so I don’t play Plan Orange with a World War II bias or conditioning from that game. Thus, I feel empowered to explore the strategy of this war, liberated from trying to impose the next war on the game design. 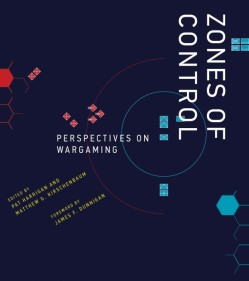 That said, to a large degree I was also motivated to play Plan Orange based on Mark Herman’s essay “Empire of the Sun: The Next Evolution of the Card-Driven Game Engine” found in Zones of Control: Perspectives on Wargaming (ed. Pat Harrigan & Matthew G. Kirschebaum, MIT Press, 2016). When talking about the players role in EotS, Mark writes:

I wanted the players to be the important theater commanders in the Pacific. Specifically, I wanted the players to represent Nimitz, MacArthur, Yamamoto, Mountbatten, and their supporting staffs. I specifically did not want the players to control the decisions made in Washington, London, or Tokyo, but to respond to guidance and the resources allocated to the Pacific Theater. I also wanted to divorce this design from the choreography of a carrier battle by avoiding tactical detail, as that was not the decision space of a theater commander. I wanted to laser focus on running the military campaigns, not the battles. (ZoC, p. 135)

Mark Herman’s Plan Orange comes with only two scenarios. The core scenario, 15.1 Shanghai Incident January 28, 1932, kicks off with the Japanese holding the initiative and two Surprise Offensive cards, Philippine Offensive and Guam Offensive in hand. The entire game is only six turns (2 years) long. There are only a few ways to win:

These few victory conditions very faithfully represent the thinking of the day; either achieve the Mahanian doctrine of naval superiority or control the Western Pacific through the Philippines.

All together, Mark Herman’s Plan Orange is well suited for a strategist game. For the Japanese player, the challenge is to drive out the US then hold off the inevitable counteroffensive. For the US, the decision is where to make the advance; Go North, Central Drive, Blockade, and Dash Across are all legitimate options. The question is, which one can you pull off?