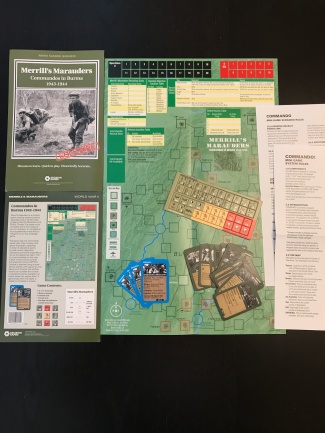 Merrill's Marauders: Commandos in Burma 1943-1944, Decision Games, $12.95. Designed by Joseph Miranda. Part of the Commando-series of games. A Decision Games mini-series product which is intended to be introductory-level and playable in an hour or less. Comes with an 11"x17" mapboard, 40 counters, 4 mission cards, 14 event cards, a four-page series rulebook and two-pages of scenario instructions. Play time is rated at 1-2 hours, but this seems to be the time necessary for an entire four-mission campaign as an individual mission can take 30 min or less.

Merrill's Marauders is a solitaire game that covers commando missions behind enemy lines in Burma during World War II. The player is the Allied commandos while the game engine is the OPFOR (opposition force). The commando player has to enter the map area and recover objectives while avoiding ambushes and other patrolling Japanese units. The game comes with four "missions" that can be played separately or strung together to form a campaign. The Mission Cards specify the number of objectives and ambushes to be secretly placed, the mission objectives, how many "operations" (time) is allowed, the force level available to buy, and any leaders. During each operation a stack of units move and event cards are drawn to determine what happens next. Battles are a simple nd6 roll against a Battle Results Table and is bloody.

The rules and game mechanics for Merrill's Maraudersare easy and certainly meet the "introductory-level" criteria of a mini-series game. The map is extremely functional, with almost all the information needed to play on it. Once the rules are learned (not a very steep learning curve to achieve) between the map and the event cards almost all the information needed to play is present. The "Operations" mechanic which counts down the number of operations (actions) available to the commando player is a nice touch that adds a time-crunch element, and winning battles (gaining Operations Points) becomes a key part of the commando players strategy. Although only four missions are included, the variable setup ensures the few missions are not going to be identical, leading to increased replayability.

Although the rules are easy to learn, they also are the weakest part of the game. This is because more than a few of the series-standard rules are superseded by the scenario instructions and the differences can dramatically alter play. For instance, standard rule 16.0 EVENT CARDS specify that when a commando force ends its movement, an Event Card is drawn. If there is an objective marker in the space, one Event Card is drawn normally and implemented, then a second Event Card drawn and implemented. This goes hand-in-hand with 23.0 OBJECTIVE MARKERS which specifies that a marker is not revealed until AFTER the two events are played. However, scenario instruction 38.1 Objective Segments & Real Objectives are revealed before drawing an event card and if an Ambush no Event Card is drawn. Elsewhere, standard rule 22.0 KILLED IN ACTION (KIA) which scores panicked and eliminated units is totally changed by scenario instruction 39.9. This change is welcome, but even with this change the ability for the commando player to score the necessary KIA to win is extremely difficult to achieve.

Despite the rules challenges that require careful reading and cross-referencing the first few times thru, Merrill's Maraudersturns out to be a short, enjoyable game that really captures the flavor of commando actions behind enemy lines. Once the rules are understood, the game becomes a deeply narrative experience that can turn out to be quite immersive.