Jim Day’s Panzer by Yaquinto Publishing was my first ever wargame, coming as a Christmas gift in 1979. I liked the game so much that I picked up the rest of the series, ’88’ and Armor as soon as they were published. These games are touchstones of my young gaming life; they were how I cut my teeth in the wargaming hobby.

Last year I ordered GMT’s MBT (2nd Edition). I have heard great things about the Panzer and MBT system over the years, but had drifted away over the decades. I am glad I came back to Jim Day’s tactical armored combat games! 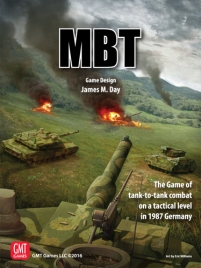 I played Scenario 1 – First Clash Pt 1 using the Basic Game Rules with the addition of Advanced Game Rule 6.2 Advanced Game Command Phase and 7.43 Command Span. I actually started play with just the Basic Rules, but quickly discovered the Soviets were running amok. I reset the game and introduced the advanced command rules to bring some sanity back to the situation.

The battle went in ebbs and flows, with the Soviets initially gaining the upper hand. The Soviets entered from the left side of the board which is generally more open than the other edge. One platoon in the center of the battlefield caught a US platoon in the open and decimated it. After that the Americans were more cautious in the advance seeking cover where available. The Soviets rapidly seized the center bridge crossing and were advancing for cover when it was ambushed from their flank by a US platoon that had gotten relatively close using cover. On the bottom edge, two Soviet platoons took on an advancing US platoon protected by overwatch fire. In a real bloodbath, the US lost a platoon but destroyed both Soviet platoons in return.

I was really glad I reset the game and used the advanced command rules. The Soviets have a single Company HQ tank that has to orchestrate their entire battle. This forced the Soviets to concentrate on the center and one flank. The Americans have two Company HQ  tanks so they were able to split their force and remain effective. About mid-battle, the Soviet commander attempted to displace forward because his advancing platoons were actually exceeding his Command Span causing a lose of control. A US M-60 in Overwatch was able to get a lucky shot and destroy him. This crippled the Soviets as they were now severely limited in command actions. As a result, the Americans were able to roll up the Soviet’s flank  and eventually eject them totally.

At first, I was worried that the extensive use of chits for marking spotting, command, and various other admin was going to crowd the map too much. I was very pleased that my fears are unfounded. The game flows very naturally and the chits do not get in the way. Very important to me, the game play and results feel realistic and not forced or contrived.