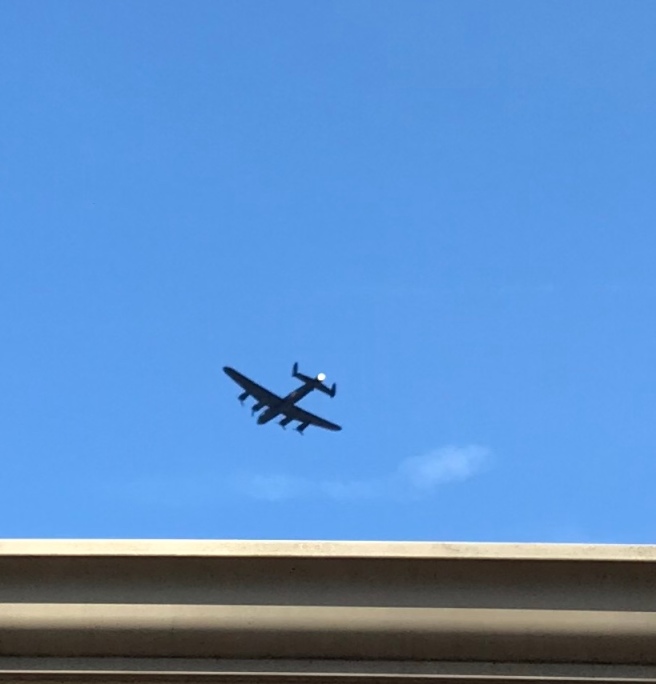 Flying over the house today was C-GVRA “Vera,” a Lancaster Heavy Bomber belonging to the Canadian Warplane Heritage Museum. The plane is in town for the Great British Fly-In celebrating the 100th Anniversary Celebration of the Royal Air Force at the Smithsonian Udvar-Hazy Center on Sunday, April 15.

The weather forecast for Sunday is not good so the organizers decided to fly the airplanes in Saturday. I was thinking about going with the RockyMountainNavy Boys to the events but may not; fighting crowds inside will be bad enough and with thunderstorms forecast going out to the flightline to see the airplanes up close may not be an option. In some ways we don’t have to go because we saw Vera today the way she’s supposed to be seen, in flight. Oh yeah, we got to hear Vera too. I have never before heard the sound of four Merlin engines purring along, and it will be a long time before that sound will be forgotten.

The RMN Boys were outside and lucky enough to see and hear Vera as she flew almost directly overhead. Some neighbor boys were stunned; both by the airplane and by the casual way the Youngest RMN Boy explained what it was. In some ways that was the best part – both RMN Boys were absolutely excited to see this piece of flying history. They understand what Vera is and what she represents; the heroic actions of so many in World War II.

It is one thing to see a plane on the ground but so much more to see it in flight. Thanks to the CWHM we enjoyed a great show from Vera today.