SOLITAIRE WARGAMES OFTEN HAVE A PROBLEM. That problem arises from the nature of solitaire play wherein the player not only ‘plays’ the game but often has to ‘run the game engine’ at the same time. Many times this leads to procedural play which can grow repetitive and uninteresting. To me, the key to breaking out of this game design cul-de-sac is to build great narrative moments into game play. Solo wargames like Enemy Coast Ahead: The Doolittle Raid (GMT Games, 2017) play out in ‘acts’ with each one telling a part of the story. In NATO Air Commander (Hollandspiele, 2019) one is always drawing cards but planning and executing your raids is full of nail-biting moments. At first look, Castle Itter: The Strangest Battle of WWII (Dan Verssen Games, 2019) comes across as very procedural and even a bit uninteresting. However, after a few plays, and as familiarity with the rules grows, a rich and exciting story emerges from play.

I backed Castle Itter on Kickstarter and recently took delivery of the game (I also picked up Pavlov’s House, 2nd Edition, but more on that later). The combination of critical praise for Pavlov’s House and the theme of the Battle of Castle Itter drew me in.

My first play thru of Castle Itter was…flat. The game is not very complex; each turn the Defender gets five Actions followed by three SS Cards being drawn and resolved. Lather, rinse, repeat. Simple yet very procedural and repetitive. I was so disappointed that I was sure I had messed up the rules somehow I reset the game and played again. I could do this in part because the game plays quickly in around 60 minutes.

That’s when the magic started to happen.

Mechanically, Castle Itter is both literally and figuratively a classic ‘castle defense’ game. Although some wargamers claim it has roots all the way back to Up Front (Avalon Hill Game Co, 1983) I never had that game so I can’t make a comparison. What I do see is  shades of Castle Panic (Fireside Games, 2012) where the monsters are descending on the castle or even Pandemic: Fall of Rome (Z-Man Games, 2018) where you not only have to defend Rome but accomplish your goals before the card deck runs out (in Castle Itter you have to survive until relieved which happens when the deck is exhausted). All of which is to say that mechanically Castle Itter feels not much like a wargame. Once I got that thought into my head the narrative portion of the game exploded. 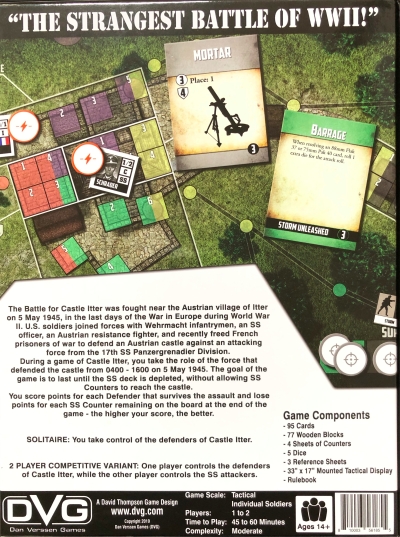 In play, Castle Itter builds an exciting narrative. Every action the rag-tag, motley crew of defenders takes becomes an agonizing decision. How do you organize a defense with an SS Officer (maybe the best leader?), an American tank crew, low-morale Wehrmacht soldiers, French prisoners, and an Austrian resistance fighter? How do you withstand hordes of SS riflemen, machine guns, mortars, and (worse) artillery?

By my third play the mechanically procedural play of Castle Itter had faded to the background and the story of the battle started emerging. I won one game (barely) and lost another (on the last two cards). In every game the tension was palpable.

I am not usually a solitaire wargamer. Although I do play solo (often against my nemesis Mr. Solo) the very nature of solitaire games often puts me off. Castle Itter is definitely an exception and will get out to the gaming table more often because not only can it be an evening ‘filler game’ taking 60 minutes or less to play but it is – at heart – an exciting story.

What do they say? “April showers bring spring May flowers?” Well, my gaming April was a drought.

April was also a very busy month outside of gaming. For the first time in a few years we took a family Spring Break vacation. Sorry friends, spending a week at DisneyWorld, even when not playing games, is quite the mental health break the family needed.

Not that the month was a total loss. I got three very exciting plays of Harold Buchanan’s excellent Campaigns of 1777 (Decision Games/Strategy & Tactics 316). After playing the full campaign first I went back and played the shorter scenarios. I strongly recommend that one play the shorter scenarios first and then jump into the campaign; the locations and strategy decisions come easier and make more sense leading to a deeper game experience.

I was also very pleasantly surprised by WW2 Deluxe: The European Theater (Canvas Temple Publishing, 2018). What looks to be a too-simple game is actually a very neat classical hex & counter wargame with enough fresh innovation to keep it from appearing stale. WW2 Deluxe exceeded my expectations!

The RockyMountainNavy Boys continue their fascination with Quarriors! (WizKids, 2012). This month they dug into their own pockets and bought two expansions for the game.

I have been a bad Kickstarter boy this month. First it was Terraforming Mars: Turmoil that ended a very abbreviated campaign with over $13 MILLION(!!) raised with over 26,000 backers. Here’s hoping the game delivers on the hype. I also caved and pledged for the Traveller 5.10 roleplaying game campaign. Hey Marc! Don’t fail me, please!

After two years of waiting (at least for me) it appears that the new edition of Conflict of Heroes: Storms of Steel! – Kursk 1943 (Academy Games) is getting real close (finally).  According to a May 01 production update:

Production for ‘Conflict of Heroes – Storms of Steel 3rd Ed’ and ‘Conflict of Heroes – Awakening the Bear 3rd Ed’ is nearing completion! The Map Boards printed by Ludofact in Germany have arrived on the coast in Norfolk, VA and are working their way through customs. Once cleared, they will be shipped on to Ludofact USA to await the arrival of the rest of ‘Conflict of Heroes’ components being produced in China for final assembly.

The Chinese printer has completed production on the three (3!) individual Game Trayz that will be included in each game, dice, and cards. We just received final proofs for the unit counters, rule books, track sheets, etc. and have given approval for final production. We are implementing final tweaks to the SoS3 Mission book.

Our printer knows how important it is that we receive these games for early June release, so they are working diligently to get everything shipped soon. We are estimating they will be finished printing within the next two weeks for shipment to Ludofact USA for final assembly with the map boards. We are currently estimating we will receive the games for fulfillment by mid-June.

We had a lot of fun showing off the new maps and game system at Little Wars last weekend. Thanks for all of your great comments and those of you who kept coming back to play even more of the 3rd Ed Missions!

We want to thank everyone for their support, great suggestions, and feedback on the 3rd Ed Conflict of Heroes system.

If all goes well, it looks like May/June/July could be a busy month for the postman it’s possible to see delivery of not only Storms of Steel but (maybe) Agents of Mayhem (Academy Games), Hold the Line: The American Civil War (Worthington), Tranquility Base/Soviet Moon (History in Action Games), Castle Itter (with Pavlov’s House) (DVG), Nights of Fire: Battle for Budapest (Might Boards), and Memoir ’44: New Flight Plan (Days of Wonder). Hopefully it makes my summer gaming interesting!

THIS IS THE TIME of the year that many folks look back on on the past year and forward into the next. This is a forward look at my most anticipated games in 2019. Note the use of the plural. There are so many games out there that it is impossible for me to declare a single one as my most anticipated! Instead, I compiled a list of games scheduled to be published in 2019 that highly interest me. It will surprise nobody that as a wargamer  all of the games on this list are, well, wargames or waros.

Amongst the many interesting games to be published in 2019, the ones of most interest to me are:

Nights of Fire: Battle of Budapest (Mighty Board Games): This title, co-designed by Brian Train, almost snuck under my radar. I totally missed the Kickstarter and it was not until Mr. Train pointed it out to me that I took notice. I am very glad I did. I am very intrigued by the mix of game mechanics (Revolutionaries using hidden blocks, Soviets using a hand-building mechanism). The different player counts also intrigues me (Coop vs AI, 2v1, Solo). The topic may be obscure but the game takes that obscurity and shines a light on it with a very innovative approach.

Conflict of Heroes: Storms of Steel! Kursk – 1943 (3rd Edition) (Academy Games): The Conflict of Heroes series is my favorite World War II tactical combat game (right up there with Panzer from GMT Games for armored combat). I participated in the ProofHQ for the new rules. Some folks complain about the new rules (especially the Spent Die); personally I like them and look forward to fighting on the steppes of Russia.

Wings of the Motherland (Clash of Arms): This will be Volume 4 in J.D. Webster’s Fighting Wings system. It covers World War II on the Russian front from Operation BARBAROSSA thru the fall of Berlin. It looks to be a huge game (with a huge price tag too) but will have over 250 scenarios using 48 new aircraft not found in previous series games. The Fighting Wings system is definitely at the higher end of the complexity curve of wargaming, but once you grasp the basic flow of the game and key concepts it plays quick and delivers an incredible narrative for the dogfight. For me, the love affair with JD Webster’s air games goes all the way back to 1987 and his Air Superiority (GDW) title.

Castle Itter: The Strangest Battle of WW II (Dan Verssen Games): I missed Pavlov’s House, the first in the now-called Valiant Defender’s series. This is a solitaire game and I usually don’t go for solitaire systems but once again the combination of interesting topic and innovative game design draws my attention. Like Nights of Fire above, these different games taking an unusual approach to the topic are popping tall on my radar this year. 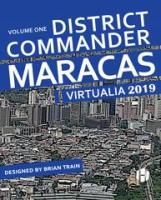 District Commander: Maracas (Hollandspiele): More Brian Train designs. I am happy to see my favorite little game publisher, Hollandspiele, bringing this games to print in 2019. For a while, Mr. Train is offering a free PnP version of the first game here. These are diceless games covering counter-insurgency in the 20th and 21st centuries. Yet again, a different game design approach to the topic. 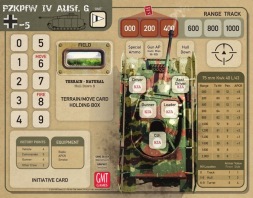 Tank Duel: Enemy in the Crosshairs (GMT Games): This is a card-based game for 1-8 players that is supposed to be fast-paced. I hope this will be a great pick-up game for the RockyMountainNavy Boys and myself. If nothing else the artwork in the game looks to be incredible and immersive.

I could keep going but I will stop here and end with this comment. I notice a lack of hobby boardgames in this list. Although I turned hard into hobby gaming in 2017 and early 2018 my interest in that segment of the hobby has dropped off. Other than Root (my Game of the Year in 2018) my more recent hobby boardgame acquisitions have been a bit flat. This past week, a new Kickstarter came to my attention: War of the Worlds: The New Wave Game (Grey Fox Games). I was very tempted to pull the trigger and pledge but I hesitated. Although the price is great ($39 basic pledge) I am not sold on deck-building games in general. It is also only a 2-player game; these days I prefer boardgames that support 3- or 4-players so it can be a family event. I think I’ll pass on this one, but am trying to stay hopeful and see what else pops up in the coming year.