WITH ALL THE CORONATINE TIME AVAILABLE, I HAVE BEEN REACHING DEEP INTO MY WARGAME COLLECTION TO REPLAY OLDER TITLES. This week I put Assault – Tactical Combat in Europe: 1985 (GDW, 1983) on the table. According to the box back:

Assault is a tactical level game of armor and infantry combat in the near future. Each hex of the two geomorphic maps covers 250 meters of actual terrain and each turn represents only a few minutes. Each counter represents a section or platoon-sized unit. The unit counters allow representation of everything from company meeting engagements to a full regiment/brigade assault. The rules cover all aspects of modern equipment, but stress flexibility, initiative, and command control.

Indeed, Command Control is really the heart of this Frank Chadwick design. As Mr. Chadwick writes in the eight-page briefing that thoughtfully accompanies the game:

Command Control: The command control system is designed to present the players with the capabilities or limitations that attend the different command control systems in use without bogging them down in the minutiae of detailed staff work. The use of operations points is, admittedly, an abstraction, particularly when TOC planning is used, but one that seems to work fairly well. The accumulation of operations points through TOC planning represents more than just a few staff officers looking at maps and thinking things over; it also represents collating and analyzing intelligence data and disseminating it to line units, briefing line unit commanders on expected enemy resistance and possible alternate courses of action, and in general, a variety of staff functions that will enable a unit to respond more quickly when the shooting actually starts. [Comment – Nobody ever claimed Frank wrote in short sentences.]

One of my favorite wargames of 2019 was Less Than 60 Miles (Thin Red Line Games, 2019). Less Than 60 Miles takes the concept of John Boyd’s OODA-Loop and makes it the center of the game. To do anything takes command and time. As I read the US Doctrine portion of the US Briefing in Assault, I was struck by these words from Mr. Chadwick written in the early 1980’s:

Given the more centralized command functions in the Soviet Army and the reliance on rehearsed battle drill, it was surmised that the decision/action cycle in Soviet units must, by necessity, be longer than in western units. An operation would cycle through one phase and, toward the end of it, start a new phase. If US units could break into that decision-making cycle at a critical point, limited command assets on the Soviet side would become overloaded and the operation would break down. It is around the concept of breaking into that decision/action cycle that US doctrine finally evolved.

Basically put, Assault is a very (then) contemporary attempt to portray the OODA-Loop on the battlefields of Europe. Personally, I think Mr. Chadwick’s design is a good one as it certainly meets his own design goal:

One advantage of the command control system in the game is that it enabled me to avoid writing straightjacket rules for the Soviet player to reflect correct doctrine. Given the relative number of HQ and TOC units available, Soviet doctrine comes naturally. Soviet units tend to move in formation in the attack. They will stay in column (march formation) as long as possible, switching to line only at the last minute to carry out an attack. All of these practices make sense for the Soviet player in game terms.

After I played my scenario I made the mistake of going to BGG and looking at the forums. Of the 39 threads there is one, just one, review. That review, written in 2011 is titled, “Assault: Only for the truly Hard Core.”

I made the mistake of reading it.

First, I’m not really sure what a ‘Hard Core’ wargamer is. Is is somebody who plays Advanced Squad Leader? Or maybe Star Fleet Battles? Is it someone who loves a game even though the rules are so complicated it’s seemingly impossible to play? Or does ‘Hard Core’ mean anybody who plays anything more complicated than, say, PanzerBlitz which this reviewer mentions more than once?

Maybe the reviewer was talking about the rules? Then again, maybe not. Assault comes with a 16-page double-column rule book. There are 24 major rule headings. Of the 24 rules (25 if you count the Introduction) two are Optional. To me, the rules come across as easy-to-read and understand and the game mechanics are not too onerous. So how could this be a game for only the “Hard Core?”

Specifically, the reviewer makes the claim, “The command and control rules are arduous and time consuming….This kind of bookkeeping was for the truly hardcore and you don’t see it in successful titles these days.”

I agree that the tiny unit IDs in Assault are hard to read. The reviewer is right; different graphical approaches (colors, bands, etc.) would make distinguishing units easier. I also find it humorous that even in 2011, like today in 2020, people forget (ignore? are unaware?) what state-of-the-art publishing was in the 1980’s. I don’t think the folks at GDW purposely avoided making counters easier to distinguish; I’m just not sure they had the capability to print them.

Getting set up for a game of Assault can be challenging, especially if the counters are not organized. For Assault I tend to be a hyper-organizer with each battalion separated into their own baggie or compartment. If you don’t take this basic step then yes, set up time can become very extended. 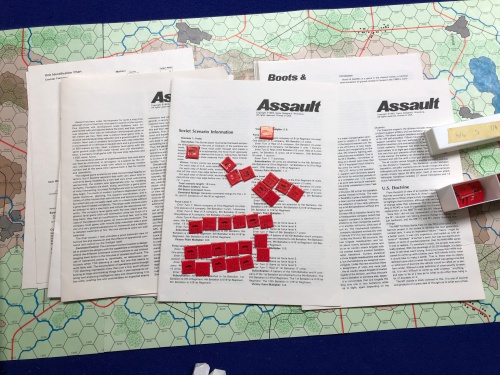 I will disagree on the bookkeeping for Assault. In my game the US side had five HQ. To determine Operations/Planning Points was five quick die rolls. Morale depends on the number of steps in a company; four or fewer steps is morale 8. five through 8 steps is morale 10, nine or more steps morale 12. Easy. The Soviet side with fewer HQs overall is just as easy (if not easier).

I will go a step further than the reviewer and add that turning units over when in March formation slows game play in Assault. I would much rather have seen the use of an information marker placed atop the unit or stack. As it was, the game already came with two sheets (480 counters) so maybe a third was cost-prohibitive.

But what about the Command Control rules themselves? What the reviewer intends as a criticism of Assault comes across as more of a strength to me:

Operations Points are one of the central element of the Assault command and control system. As a concept it is pretty simple, certain actions take command points to perform. Run out of points and you can’t take those actions. Not bad so far, eh? As long as you are careful with your units, plan ahead, and don’t try to do everything at once, things should go smoothly enough. But not every HQ/TOC has the same number of command points available, so some units (and by units, in this case, I mean Companies and Battalions) will be more effective than others.

“As long as you are careful with your units, plan ahead, and don’t try to do everything at once….some units…will be more effective than others.” That is the design effect of the Command Control rules and that is why Assault is a very interesting game.

The Assault scenario I played was Scenario 1: Probe. Here a US screening and blocking force is covering a gap between major units. One very nice element of these scenarios is multiple force levels available which makes for always different match ups. In my battle a US armored battalion with a cross-attached mechanized infantry company defended against a Soviet mechanized infantry battalion supported by a reconnaissance company, an attached battery of artillery, and eventually a tank battalion. The Soviets have 18 turns (1.5 hours) to cross the map (16 km). This is harder than it seems given that the first two Soviet HQ do not enter the map until Turns 5 and 7. If the Americans can get in amongst the Soviets early they can disrupt them and dramatically slow their advance across the map. On the other hand, the longer the Soviets can keep in March Formation and get across the map the closer they will be to victory. The entire battle hinges on the Command Control rules.

The reviewer sums up the game review with these comments:

This is a difficult game, no doubt, the learning curve is steep. This is a game that you plan to play all afternoon or evening, 2-4 hours from pulling out the box to packing it up again – even for a small scenario. But once you’ve played it a few times, and gotten past the fact that not only are you the battalion commander but also every squad leader, cannon cocker, and tank commander wondering which shell to load for the next shot, you will have a much better understanding of what it takes to get an armored battalion into the fight, in near contemporary conditions. This is a good game, but I don’t expect to see its like again.

Let me break this down:

As much as I disagree with the reviewer, I will thank them for making me think about why a game works for me or not. To start with, we both obviously have a very different opinion as to what a ‘hard core’ wargame is. I also now more fully realize the impact game interfaces have even in the classic hex & counter wargame media. Overall, for me all those reviewer comments do not make Assault a game for the ‘Hard Core.’ That said, the reviewer is right in that game component interface could be better – but that alone does not make the game unapproachable for the non ‘hard core.’