How to lose a customer in three steps: 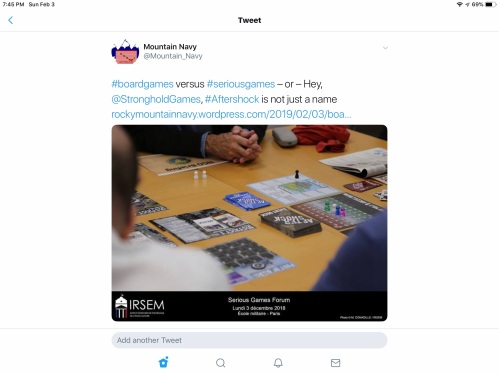 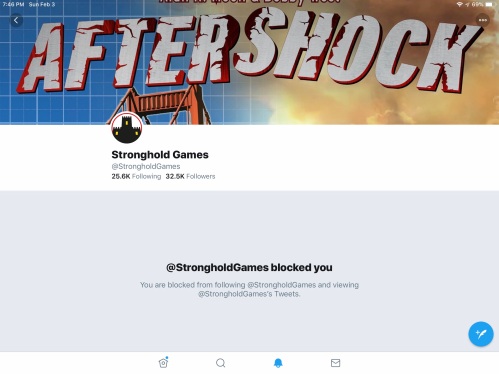 Hey, @StrongholdGames, I get it; I am a nobody. I am no Tom Vasel or any sort of leading content reviewer for the hobby boardgame industry. I play boardgames. With my boys. At home. I prefer wargames (gasp!).

But when it comes to the name of your Aftershock and AFTERSHOCK: A Game of Humanitarian Crisis, you are wrong.

Let me repeat what I said before:

I understand Stronghold Games needs to make a buck but Stephen Buonocore, you’re better than this.

One suggestion made on the BGG forums is for Stronghold to find some way to acknowledge the PAXSIMS predecessor. This approach was graciously endorsed by Rex. I also believe this is a respectable way ahead. It is an approach that shows support to both hobby gaming and serious gaming.

Stronghold Games, you are a gaming industry leader. Show us that you truly deserve to be.

From conversations with @RexBrynen, I understand that one of the suggestions is to rename the Stronghold Games version to “Aftershocks.” Or include a blurb in the box about the PAXSIMS not-for-profit version. Or a section on actual disaster relief. Rex says so far he has heard nothing back from @StrongholdGames.

Thin skin, eh? You block me after I write one post on a blog with 44 followers that was tweeted to an account with 675-ish followers. YOU LIKED IT! Then I guess you read it. I fully believe my call to action was respectful. I have tried to keep to a higher morale standard. I did not pledge to your Kickstarter in order to post negative comments. I wrote no comments in the BoardGameGeek forums until you blocked me.

So go ahead, ignore me. I don’t expect you to read this. It’s OK. Like I said, I am a nobody. A nobody that bought six Stronghold Games titles last year. A nobody that is going to buy zero this year…and conceivably beyond.

Yeah, only six games…small potatoes in your world of $20k Kickstarter campaigns. A microdrop in your Terraforming Mars empire.

But it’s my drop…and you have shown me you don’t deserve to sip at it.