November was a VERY slow gaming month. Lots of moving parts conspired to reduce the number of games played this past month. The RockyMountainNavy tribe missed two (2!) weekends of game nights. This is the first time since August 2016 that we missed  more than one week at a time. It also doesn’t help that the Youngest RMN Boy started Indoor Track season which digs into my weeknight game time. It also doesn’t help that my gaming space has been overtaken by the gift wrap station….

So how did the month look? 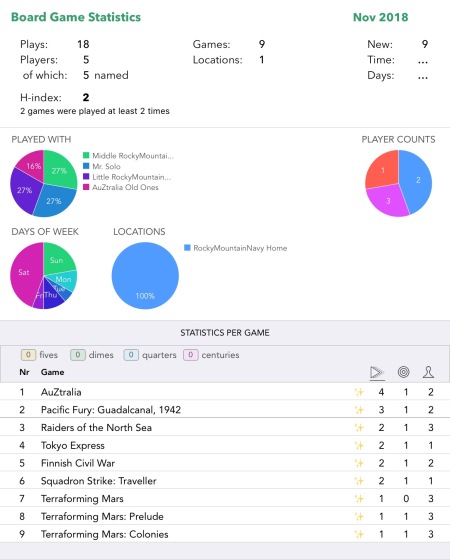 According to BGStats, I played 18 games in November. Once again, the way BGG Stats tracks plays is off as I actually played 16 games and two expansions. The multi-game play was Terraforming Mars (Stronghold Games, 2016) using both the Prelude and new Colonies expansion.

The game of the month was definitely AuZtralia (Stronghold Games). All my plays to date are solo play as this game has yet to reach the RMN Game Night table. My initial impression was a bit weak, but as time has passed the game has grown on me more. I really want to get this one to Game Night and see what the RMN Boys say!

My Grognard Game of the Month was Tokyo Express (Victory Games, 1988). It was a real treat to play it again after so many years. A solid design with alot to teach about what a real solitaire wargame can be.

It was also Black Friday in the States with many sales. Actually, the entire month of November featured many sales, a few of which I took advantage of. That is how I welcomed Brian Train’s Finnish Civil War (Paper Wars, Compass Games 2017) to my collection.

The biggest surprise of the month was the Kickstarter fulfillment of Squadron Strike: Traveller (Ad Astra Games) after a delay of over two years. I will have many more thoughts on this game coming at you in the future. Actually, there are several Kickstarter and pre-order fulfillments coming that I did not expect as recently as two weeks ago. My preorder copy of Pandemic: Fall of Rome (Z-Man Games) is enroute, and Conflict of Heroes: Storms of Steel, Kursk, 1943 (Academy Games) may be in hand before the end of the year! I will also likely add several more games to my order list as Hollandspiele is having their Hollandays sale starting the day this posts.

December will continue to be gaming challenge as we are busy and my gaming space is preempted. On the plus side, I earned a generous amount of vacation time and I plan on using it at the end of the year (after Christmas). I feel that the last week of December may see an explosion of gaming as I make up for lost time.

Here’s wishing all of you a Happy Holiday. May you spend it gaming with family and making memories for a lifetime.