The RockyMountainNavy household is a bit busy this holiday with family visiting. Unfortunately, this means the last weekend Game Night was cancelled due to travel. However, this week (and especially thanksgiving Day) saw some games landing on the table. For some reason, the Red Planet Mars seemed to be our theme…. 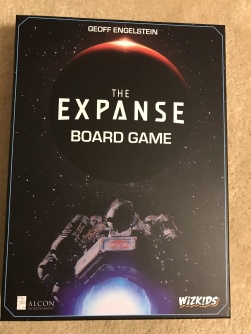 Thanksgiving Eve the RMNBoys and myself played a 3-player game of The Expanse Board Game. The game was slow with some analysis paralysis as the boys tried to get their heads wrapped around the game. The game ended a bit early when the sixth Scoring Card came out before the fourth or fifth had been played. At the end of the game I was a bit worried because Middle RMN Boy (on the Autism Spectrum) reacted a bit negatively to the ruthless play of his brother. I (belatedly) realized that The Expanse Board Game is a bit more on the “ruthless” side of gaming and not like other games we have played recently. The contrast was all-the-more apparent since the previous games Middle RMN Boy had played were the cooperative Ghostbusters: Protect the Barrier Game or the very family-friendly Ticket to Ride. To further exacerbate his loss, he had played the OPA which probably has the most “indirect” asymmetry of the three factions. Maybe I should have encouraged him to take the more militant MCR or the diplomatic UN. Thus, it was with some trepidation that I agreed to another play of The Expanse Board Game on Thanksgiving Day. Middle RMN insisted that he play the OPA again and I did not get in his way.

After the first game, we had talked about how the game encouraged being ruthless and how it was not his brother being mean, but the design of the game. I was hoping he understood. After the game it was very apparent that I had little to worry about for he was just as ruthless as his brother. In the end, Little RMN ran away with a victory but Middle RMN and myself were in a virtual tie. The boys both want to play again, and I too am more comfortable playing with them as Middle RMN Boy now seems to “understand” the game and not take it personally.

Thanksgiving Night ended with a full game of Terraforming Mars. Little RMN again proved to be ruthless and gave us no mercy with another runaway win. This was the second full-play of Terraforming Mars using the regular Corporations and the boys are exploring various strategies and getting better at playing Action Cards. As we were putting away the game, we looked at the Corporate Era cards. The rule book states that using the Corporate Era cards will result in an extended game; elsewhere I have read using these cards results in a more “confrontational” game. For that reason I was not planning on introducing these cards until after a few more plays. However, after The Expanse Board Game the RMN Boys are in a bit of a “confrontational” gaming mood and want to play the Corporate Era variant.

Although our Thanksgiving games ended well enough, it reminded me that playing with Autism Spectrum must always be in the back of my mind. When introducing a new game, I need to ensure that the tone of the game is presented up front to avoid negative emotions. I am happy to do this because – at the end of the day – I get to game with two of my greatest gaming partners.

5 thoughts on “No Turkeys on Mars – #TurkeyGameDay17”