Visited the Friendly Local Model Shop today. They are (unfortunately) going out of business following the death of the owner. As part of their end-of-days, they put all their items up on a great fire sale. 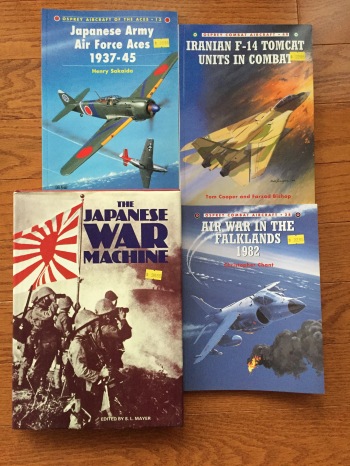 Among the many models were more than a few books. I picked up a few. As you can see, they were mostly Osprey and cover some eras I really love, like the Falklands War, and aircraft I admire (Tomcats Forever!).

After playing Wing Leader: Victories and Wing Leader: Supremacy, I realized I don’t know as much about Japanese fighters as I thought I did. The Japanese Army Air Force Aces 1937-45 book is the usual Osprey-fare with many pictures and plates and just enough depth to make it interesting. The Japanese War Machine is a 1976 publication and is what I call “coffee-table history;” i.e. an oversize book with many pictures and maps and not too in-depth text.

Air War in the Falklands 1982 looks to be an updated version of an earlier Osprey publication. Glancing through it I noticed many more Argentinian pictures and related text. It is good to see “the other side” of this war.

Iranian F-14 Units in Combat is another “forgotten war” book. As much as the US flew the F-14, it was Iran who flew the Tomcat in combat during the 1980’s. There are many little snippets in here that make good scenario fodder for Flight Leader or Air Superiority or Birds of Prey.

I am also very blessed in that my boys are interested in history and are voracious readers.  They too will read these books and we will likely have several long discussions about them. Although I didn’t pay much for these book, the real payoff is in the talks with my boys which are priceless.