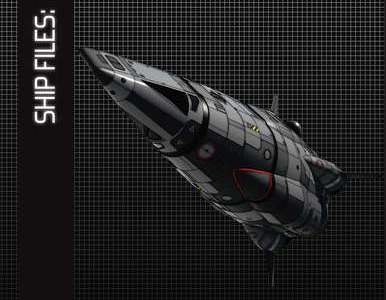 Atticus is my first Moon Toad Publishing (MTP) Ship Files book. I am a fan of Ian Stead (@biomassart on Twitter) and greatly enjoy his work for Gypsy Knight Games and their Alternate Traveller Universe/Cepheus Engine Setting Ships of the Clement Sector. I had seen several other MTP products but it was not until very recently that I made the connection between MTP and Ian.

Atticus is a 100 dTon fast (Jump-2 / 6G acceleration) multi-use vessel  – a perfect ship for a small group adventure in a small-ship universe setting. But what really sets the Atticus apart from the usual slew of Traveller/Cepheus Engine ships is the fact it is a tail-sitter! This makes Atticus a design closer to hard scifi than the usual “airplane in space” found in so much space opera. It also harkens back to classic Traveller RPG designs such as Broadsword or Azhanti High Lightning where the decks were stacked. In some ways I have to wonder if Atticus is Ian Stead’s version of Rochinante from the TV series The Expanse. Regardless, Atticus is an interesting design that can be dropped into any Cepheus Engine adventure from space opera to hard scifi.

The Ship Files book is a 24-page full color pdf. The file book starts with an in-universe description of the Atticus that right up front addresses the unusual configuration. This part is not to be skipped for there are many little details that a referee (or player) could use as adventure seeds. Statistics using Cepheus Engine are provided, as well as many line and color drawings and deck plans. Actually, there are two variants presented; the standard and a non-jump version. An example crew is also provided; three instead of the usual four members because, “it is currently one person down, the crewman having left over an argument about pay” (p. 16) Speak about an adventure seed!

MTP Ship Files books also include a two-page Spacecraft Record sheet. This sheet lays out the ship statistics in a much easier to understand manner than the simple table usually presented in Cepheus Engine.

I was very pleased to see that Ian took advantage of several Cepheus Engine products beyond the basic System Reference Document in creating this ship. Ian used the spectacular Anderson and Felix Guide to Naval Architecture (2E) published by Gypsy Knight Games as well as the recently released Cepheus Engine Vehicle Design System. I am very glad to see third-party publishers taking advantage of each other’s products; it builds community and gives us customers a better product!

Ship Files: Atticus is not without its flaws. Page numbering is laid out as in a book but the pdf file is sequential meaning page “2” of the pdf shows “1” at the bottom. This makes the table of contents one page off from the search function. The first Spacecraft Record sheet shows the class name as “Polixenes” which I take was a previous Ship Files product. Neither of these flaws are egregious nor in any way degrade the overall superior quality of the product. This product is also a real steal at $3.99 on DriveThruRPG.