A navy’s purposes deal with the movement and delivery of goods and services at sea; in contrast, an army’s purpose is to purchase and possess real estate. Thus a navy is in the links business, while the army is in the nodes business. Seen that way, a navy performs one or more of four functions and no others: At sea, it (1) assures that our own goods and services are safe, and (2) that an enemy’s are not. From the sea, it (3) guarantees safe delivery of goods and services ashore, and (4) prevents delivery ashore by an enemy navy. – Captain Wayne P. Hughes, Jr., Fleet Tactics and Coastal Combat, Second Edition, Annapolis (Naval Institute Press), p. 9

ALL TOO OFTEN WHEN WE GROGNARDS PLAY WARGAMES, we focus on the ‘how’ of the fight and forget ‘the why.’ My history of playing naval wargames shows this to be very true for myself. My first naval wargames were Wooden Ships & Iron Men (Avalon Hill, 1974) and Harpoon II (Adventure Games, 1983). Both of these game are very tactical; in each you are often fighting an individual platform (or groups of platforms) executing a specific mission or task. This makes it very easy to get focused on ‘how’ a platform fights but not necessarily understanding ‘why’ the ship/sub/plane is there. Operational-level wargames, like the venerable Fleet-series from Victory Games in the 1980s, do a bit better of a job by forcing you to combine platforms to execute missions. But at the end of the day the real reason for a navy does not always come thru. In true wargamer form, the battles are often fought out to the last with no objective other than the complete an utter destruction of the enemy. Fun (in a way) but not very informative.

Thus, I was surprised at Blue Water Navy: The War at Sea (Compass Games, 2019).  The game is another in the recent renaissance of ‘Cold War Gone Hot’ wargames, this time focusing on the naval war in the North Atlantic, Arctic, Mediterranean, and Baltic. As the ad copy says:

Blue Water Navy covers the war at sea, air, close-ashore and low-earth orbit from the Kola Peninsula in Northern Russia to the Mediterranean Sea and West over the Atlantic Ocean to the United States and Cuba. The game models the full order of battle that could be expected in 1980’s wartime, from multi-regiment Soviet Tu-22 Backfire bombers to multiple US carrier groups.

I posted some thoughts on Blue Water Navy before. At that time, I focused in on the ‘how’ to play the game. With my extra Coronatine-time I pulled the game out again for a deeper dive into the system. I happily discovered another layer of the game that I had missed; one that makes Blue Water Navy a great example of ‘why’ navies fight. It is so obvious. I mean, designer Stuart Tonge put it in the Introduction, “Always remember the game is about the convoys – if they get through, NATO wins the war.”

Of the 32 numbered major rules in the book, the two most important for this discussion are 18.0 Amphibious Landings & NATO Troop Delivery and 20.0 War & Invasion Tracks. Indeed, buried within 20.0 is the actual victory condition for the Campaign Game:

Hammer and Sickles: This shows when the game is won. To win the Soviet player must be able to count four hammer and sickle symbols on War Tracks overrun by Soviet armies.

“But wait,” you say. “I thought Blue Water Navy is a naval wargame! What is this talk of Soviet armies?” The truth is no matter what you do in Blue Water Navy, as a player you are trying to move the Invasion Marker along the War Tracks.

The Soviet player advances along the Norway and Denmark Invasion Track by putting Troops ashore using Amphibious Landings. NATO can strike Soviet troops to stall the advance. One advance is cancelled for every three hits scored by NATO. This means NATO needs to project power ashore, in this case using airpower or cruise missiles to slow the Soviet advance.

The North and South War Track both represent the invasion of Europe. The North Invasion Track is the classic Central Germany front and the South Invasion Track is the route through Yugoslavia to Italy. Every turn the Soviets advance one box westward. On the North War Track, NATO can cancel the advance by expending Supplies or Partial Supplies. These ‘supplies’ can only be delivered by NATO Convoys to Western Europe ports. On the South War Track, the advance is cancelled by hits by NATO, much like the Norway or Denmark War Track.

Rule 28.0 NATO Losses also forces the NATO player to think about what he is fighting with. A Convoy Massacre (destruction of a Convoy) earns one NATO loss point. Another point is lost for a carrier damaged (2 if sunk). If the carrier is lost north of the SOSUS line it’s another loss point. If the NATO loss marker ever reaches six points, it’s worth one  Hammer and Sickle of the four needed to win for the Soviet player.

There are several other rules that have an outsized impact on the number of Hammer and Sickle. Rule 22.1 First Strike Points (FSP’s) , “…represents the nuclear posturing of both sides. If the Soviets can maintain a credible First Strike capability, the Politburo…will feel able to take aggressive actions such as using nuclear weapons or assassinating high-value targets.” FSP’s play directly into 27.0 Soviet Stability which tracks the political climate in Moscow. If the Soviets trend toward instability, the advances may be slowed, more ‘supplies’ arrive, and at worst they lose a Hammer and Sickle. Oh yes, less you think nuclear weapons are a quick route to victory, once the genie is out of the bottle and Battlefield Nuclear Weapons are used those Hammer and Sickle spaces on the Invasion Tracks with more than one are reduced to a single symbol.

The Rule Book for Blue Water Navy is 56 pages. Realistically speaking, 52 pages are ‘how’ to fight the war but there are four essential ‘why’ to fight pages. That is part of the lesson here; the fight is complex even when the reason or objective is simple. All those rules for ships and submarines and different aircraft exist for a few simple reasons. Going back to Captain Hughes’ words at the beginning of this post, Blue Water Navy very clearly illustrates that the role of the navy in war is, At sea, it (1) assures that our own goods and services are safe, and (2) that an enemy’s are not. From the sea, it (3) guarantees safe delivery of goods and services ashore, and (4) prevents delivery ashore by an enemy navy.

Postscript Note: Bit worrisome that in this day of return to near-peer competition the ability of the US Navy to protect the movement of forces across the Atlantic is doubtful. See Navy Drills Atlantic Convoy Ops for First Time Since Cold War in Defender-Europe 20. I particularly note this quote, “The Navy is exercising a contested cross-Atlantic convoy operation for the first time since the end of the Cold War, using a carrier strike group to pave the way for sealift ships with a cruiser escort to bring the Army ground equipment for the Defender-Europe 20 exercise.” First time since the Cold War? First time since 1986? Looks like the USN needs to find a way to play the 1:1 scale version of Blue Water Navy more often.

The second game in my 2020 RockyMountainNavy Solo Boardgame Challenge is Pavlov’s House (Dan Verssen Games, 2018, Second Edition 2019). While playing the game for my challenge I was struck by elements of play that actually teach the operational art of war. While it is easy to look at Pavlov’s House as simply a tactical battle to defend a building, the operational aspects of the game teach the lesson that defending even a single house takes an entire army.

The Game Board in Pavlov’s House consists of three zones, each one depicting a different view of the battlefield. You have the super-tactical Pavlov’s House view of the building interior, the tactical depiction of 9 January Square around the house, and The Volga giving you the operational area picture. Each map has unit symbology on it showing the location of different organizations and echelons of command. More importantly, the actions of these different units are reflected in the Soviet Cards.

The Soviet Cards are the heart of the Soviet Card Phase which are, as the rule book puts it, “the operational-level actions taken by elements of the Soviet 62nd Army during the Battle of Stalingrad that contributed to the successful defense of Pavlov’s House.” In my latest play it finally struck me just how much detail is abstracted into the Soviet Cards and what they really represent:

Once players are familiar with the play of Pavlov’s House I strongly recommend the introduction of variant 7.1 Operational Support Cards. This adds the Operational Support action for the 62nd Army Command Post. The Operational Support actions represent other key battleground activities around Stalingrad that, if successfully accomplished, gain Soviet VP but at the cost of leaving the defenders of Pavlov’s House more vulnerable as limited resources are spent elsewhere. This simple, abstracted game mechanic very clearly illustrates that Pavlov’s House was part of a larger battle and sometimes higher HQ has different priorities. For the player, it boils down to what can be an agonizing risk versus gain decision.

The operational-level elements of Pavlov’s House, implemented using simple, abstracted game mechanics in the Soviet Cards, form a major part of the game and arguably are the decisions of most importance. Although it is easy to focus on the tactical battle by the defenders, the Soviet Cards and their associated actions remind you that before you can fight you need not only soldiers but beans and bullets too. The defenders of  Pavlov’s House, the 7th Rifle Company and 3rd Machine Gun Company of the 3rd Rifle Battalion, 42nd Guards Rifle Regiment, 13th Guards Division, 62nd Army were but the tip of the spear supported by numerous other 62nd Army elements. Victory in Pavlov’s House only comes when all that support is coordinated in the most efficient manner.

In the course of doing some reading for this post I picked up a book on my shelf, Looking Down on War: Intelligence Images From the Eastern Front by Colonel Roy M. Stanley II, USAF (Ret.) (Pen & Sword Aviation, 2016). Colonel Stanley worked for the Defense Intelligence Agency (DIA) and came across a stash of images the Allies seized at the end of World War II from the Luftwaffe. These aerial images of the war are fascinating. In his book, Chapter VII is devoted to Stalingrad. When I compared several images to the map, I was struck by how the maps accurately portray the location yet fail to capture the utter destruction of the battle. 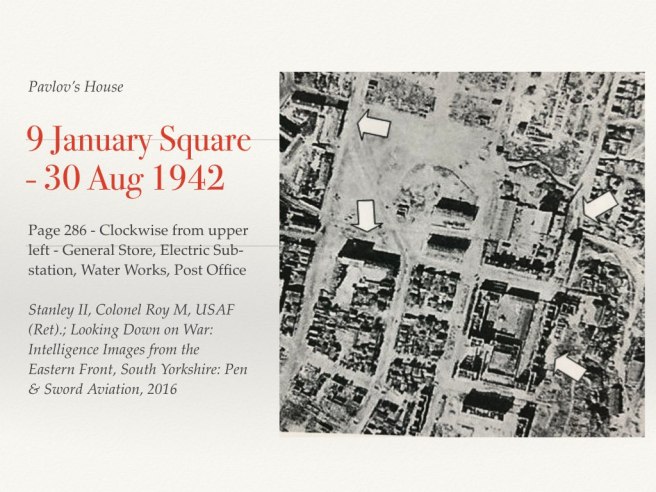 The tactical map in Pavlov’s House is a fairly accurate portrayal of the location. However, I think it captures the house near the beginning of the battle because, as you can see, by the end of August the entire area was actually quite desolate with few structures intact.

The Operational Map in Pavlov’s House is fairly accurate, except again for some infrastructure. For instance, the railway clearly depicted on the map is actually in much worse shape by August. 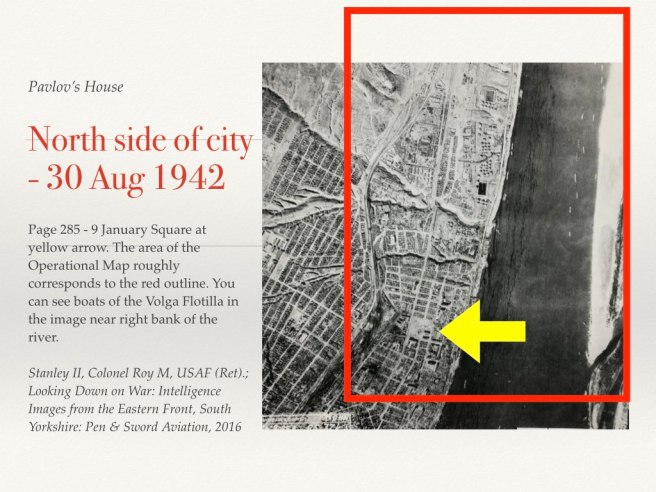