An aperiodic look at books and wargames that go together. The wargames and books presented here are both drawn from my personal collection and do not necessarily reflect the best of either category…but if I’m showing them to you I feel they are worth your time to consider!

Plan Orange was the U.S. Navy’s contingency plan in the event of war with Japan. First developed following the First World War, when Japan was identified as the most likely naval opponent in a future war, the plan assumed that Japan would quickly seize control of most of the Philippines. The U.S. Navy would then launch a counteroffensive across the Mandates in the central Pacific with the goal of relieving Manila and blockading Japan. The plan was continually updated to reflect shifting alliances, improvements in naval technology, and the relative strengths of the fleets. (The Pacific War Online Encyclopedia) 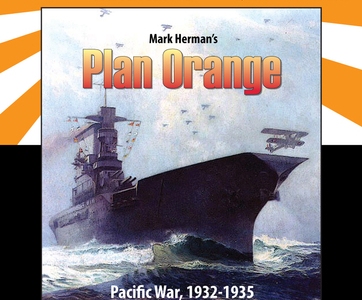 On the last day of my winter vacation I got Mark Herman’s Plan Orange: Pacific War, 1930-1935 published by RBM Studio in C3i Magazine Nr 29 on the table. Unlike the first time I played (which was really more a learning game to get familiar with the rules) this time I tried the campaign scenario. By the time I was finished, I found I (equally?) liked and disliked the game.

I really like the Plan Orange situation. The game gives players an interesting look at the strategic challenges facing both Japan and the United States. The game brings to life Edward Miller’s War Plan Orange: The US Strategy to Defeat Japan, 1897-1945 as well as Hector Bywater’s The Great Pacific War: A History of the American-Japanese Campaign of 1931-33. In the 1930’s, aviation (especially naval aviation) is still in its infancy and not the dominating power it would be only a decade later. Plan Orange reflects this situation by keeping naval power supreme over air. I also really like the use of the CDG-mechanic because it give players challenging decisions to decide not only what they want to do, but how to use the cards to make it happen. I appreciate the CDG mechanic because it represents the planning and execution of plans that don’t always perfectly match the commander’s desires.

Plan Orange is also best described as a version of Empire of the Sun (GMT Games). The rules for Plan Orange appear to be almost a cut-n-paste version of EotS:

PLAY NOTE: In several places in the rules it will state that a particular section or step is ignored or left blank in Plan Orange. These are sections that have rules in the parent design Empire of the Sun and I wanted to avoid creating a new numbering scheme that might confuse players if and when they are playing the original design upon which this is based. – Plan Orange 1.21 Inventory.

Which brings me to the part I disliked. I don’t own – and never played – EotS so I came into Plan Orange depending totally on the rule book provided. Unfortunately, the rules are very confusing in places, or totally lacking. For example, I cannot find the rule for when to reshuffle the player deck! I wonder if this is because the Plan Orange version is cut down too much or if this was an oversight in the original rules. I hope it is the former, because to repeat a mistake 10 years later is unacceptable!

For my play thru, I was able to complete five turns (out of the six-turn campaign) before I had to pack the game away. Plan Orange is fun, though I find I am still reaching for the rulebook often and spending much time searching for a rule or trying to interpret it. I feel the game system should be easy, but the rule book keeps tripping me up. I want to get to the point the I know the rules enough to focus more on game strategy than “the system.” Unfortunately, the rule book is not being the most helpful.